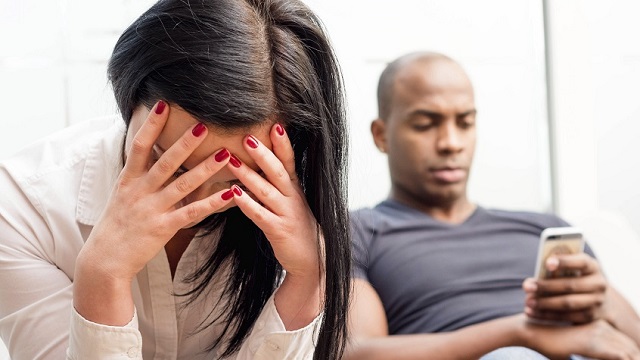 There is nothing as devastating as getting married to an insecure spouse, honestly, it’s better imagined than experienced. When Bayo walked down the aisle with his bride Tola 2 years ago, he was so full of hope that their marriage would be blissful, little did he know that he was about to make one of the greatest mistakes of his life.

Tola is real fun to be with though quite reserved, but her major problem is insecurity which grew worse over time; whenever she was confronted about it she was quick to reply in the defensive that she was only trying to protect her interest. Her attitude wasn’t strange to Bayo but he felt she would overcome it once they were married.

Bayo works in a modeling/advertising agency where he is also a major partner and due to the nature of his job, his clients are mostly female; asides that, his business partner Jumoke is also a female. Most of his colleagues thought he was going to settle down with Jumoke because they had been together as friends since campus days, and coupled with the giant strides they had made in business over a short time, they seemed to be a match. However, Bayo had other plans for marriage because he never believed in mixing business with pleasure, while Jumoke was more preoccupied with advancing her career. Tola on the other hand, worked as an admin officer in a firm in Abuja before she resigned so she could join Bayo in Lagos after their wedding. Unfortunately for her, she hasn’t been able to secure another job which made her more idle than she bargained for and to make matters worse, her husband spends most of his time at work fake watches.

The thought that Bayo had to work so long in the office with Jumoke was more than enough reason to drive her nuts. Initially when she complained, Bayo took it with levity but when she constantly nagged about it, he had to tell her point blank that she should adjust and that he wasn’t going to ruin the business they had been building just because it didn’t go down too well with her. Although Bayo even made several attempts to close work early, only to get caught up in traffic; the stress of the traffic and the thought of the work he could have accomplished if he were at the office made him have a rethink. However, he ensured he spent his Sundays with his wife which as far as she was concerned was not good enough.

Things became worse when Jumoke had to travel to the US on a business tour, the bulk of the work at the office fell on Bayo so he had to spend more time there. The difference in time zone didn’t help matters either because he had to pick Jumoke’s, calls at odd hours so as to update her with the events at the office. This development made Tola unhappy and she began to pick up quarrel at every slightest opportunity; Bayo kept his cool because he just wanted peace to reign. As if that wasn’t enough, Tola called Jumoke warning her to stay off her husband. Unfortunately for her, Jumoke was not in a good mood when she called and so she didn’t hesitate to put her in her place. When the news got to Bayo, he blamed his wife for taking things too far and insisted she apologised to Jumoke but Tola refused and even threatened to do worse if things didn’t change. Jumoke on the other hand gave Bayo a condition to either put his wife under check or they split the business. Bayo knows he can’t afford to split the business now, unfortunately his wife is also not ready to budge; what should he do?

NB: please drop your comments and share with others, thank you replica watch.